Showing articles with the tag(s): 'notices'

Class started on Monday 4th of February with 3 students. Then on Tuesday, we had our 4th join us. Welcome to Polycademy, Ash, Matthew, Tim and Phuong. Since Polycademy focuses on a project based course our first day was working on the ideas that all the students came in with, and turning them into concrete feature sets. We then turned these feature sets into a technology stack which included the generic solution stack to run any web application, and the technology stack that is used to solve their particular domain problem such as external APIs including Mailchimp, Google Maps.. etc. 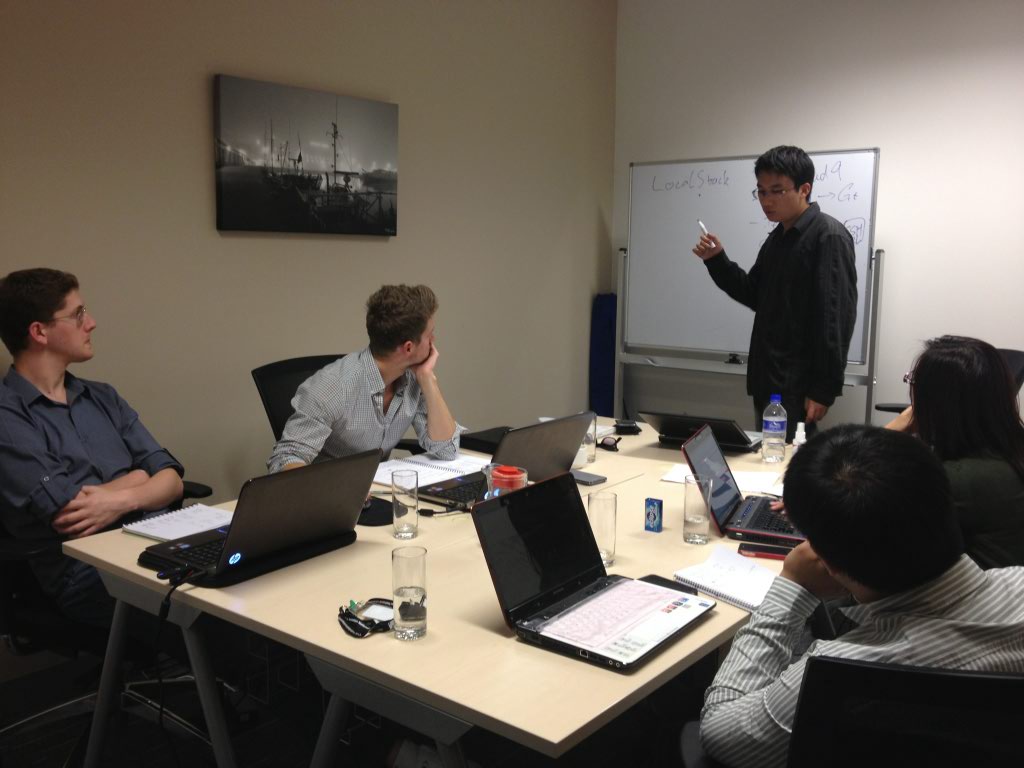 We also began our agile workflow, which meant that in every session, we have a scrum asking ourselves three questions:

All of the students have different ideas for their web apps, and their all very exciting. I can't tell you them in detail, but there's an assortment of apps dedicated to productivity, parking, children and games. One thing is for sure, I certainly surprised people with the amount of work they'll have to do at home and at class to get their application done. But I believe they will be ready.

At home, students are asked to read through Polycademy's devhub wiki. It provides them with more detailed information and areas of exploration. It's currently private to Polycademy. Think of it as a never ending online textbook. For the next 3 weeks, we'll go through Vision & Plan, Solution Stack (involving IDE and builds/testing), and Web Design (involving User Experience Design and User Interface Design and Photoshop).

One thing I asked the students to do, was to write a blog on their experiences. I'll probably need to incentivise this activity! When I have the urls, I'll be plugging them obviously!

Finally we're all going out for a meeting at a bar this Saturday afternoon so all the students can meet their mentors.

Happy New Year! I’ve been busy organising the assets and logistics for the February launch. Unfortunately Entry 29 won’t be ready in time for the February launch. Fortunately I found a lot of good deals and another place that has potential. Furthermore, over the last 2 months, I received people who are interested in helping as mentors and many more developers interested in becoming lead instructors, co-instructors or teaching assistants. Some are even interstate!

The big one would be computers! I’ve considered multiple options because are there are many different ways I could structure the class with the computers.

The Lenovo all in one is slightly cheaper than the Dell all in one, it has roughly the same kind of specifications though. However it requires external optional arm in order to have it stand up on the table. I personally don’t like the monitors with no feet. It offers keyboard and mouse bundled together.

The Dell has a very large screen. It’s quite good looking too. Both of these All in Ones can run Windows and Linux. They both will be quiet and portable. This also offers a wireless keyboard and mouse bundled together.

So I’ve decided on a logic chart like this:

Furniture is another interesting issue. Depending on the location, I may have furniture supplied to me by the people who own the place, or I may have to bring in my own furniture. A Canberran company called Office Furniture Direct can offer me 8 Ronda Tables (fitting 2 people each) and 15 Mesh chairs at around $2800.

Because Entry 29 won’t be ready, I’ve had look for other places willing to offer a 3 month or 6 month lease. Currently I’ve found a place at 7 London Circuit. That’s right, it’s the same building where NICTA lives. This is a grade A office. It should be expensive. But it actually fits my budget! That is if I can get 10 or more people signup and pay the deposit. If I get lower than 10, I’ll have to move somewhere else, or only execute the 11 week program, as a shorter time means shorter lease. This place however is very very cool. 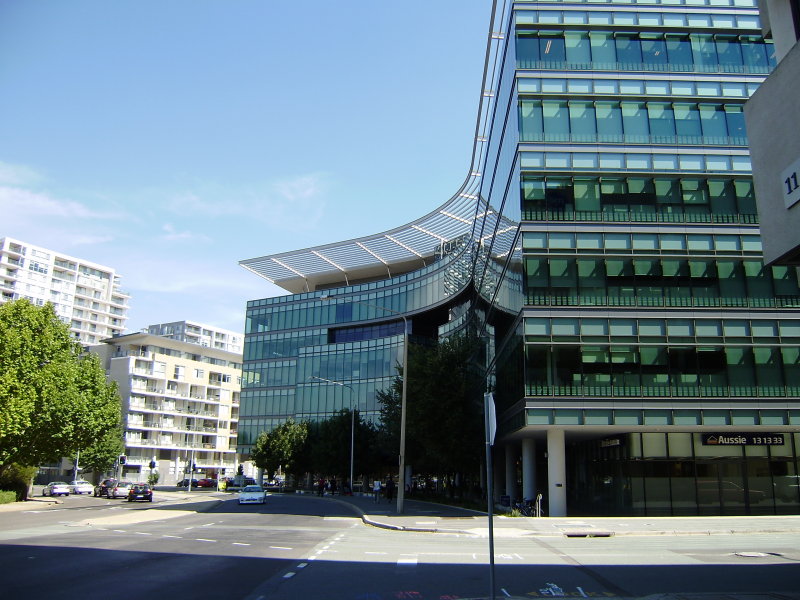 I’ve secured a partnership with ReadSpeaker. It’s a company that focuses on turning web content into audio. They have major clients in the Government. They’ll open up their API so the students of Polycademy can learn web service architecture! The managing director of the Australia New Zealand division is even interested in speaking at Polycademy regarding entrepreneurship.

Oh and I’ve got about 5 other developers around the country who’s interested in becoming mentors for the students. The deal is a minimum of 1 hr a week. Each student or team part of Polycademy will have a mentor where you can discuss the weekly programming problems or entrepreneurial problems. They'll all be up on a Partnership page soon.

I’ve interviewed over 30 potential teaching assistants. About 10 of them are in the pipeline for the second interview. The second interview is actually a challenge, where they must create a video that teaches me something they didn’t know before. The results of this shall come around 20th January.

Since posting the co/lead instructor jobs around the intertubes, I’ve received interest all around the country. Seems like such a job would be quite an interesting experience. There must be at least 15 students to justify the cost of bringing in another instructor. I myself will also be the lead instructor along with some teaching assistants.

The company account will be opened soon with Commonwealth Bank, so as per the terms and conditions I’ll be asking for deposits after the 15th January. The deadline will be 18th January.

Oh and today and tomorrow is the last chance to enter the scholarship competition. Remember to be eligible you need to apply on the course page as well. This is so that I know your preferences.

For the rest of the month, I’ll be focusing on developing the course material and putting it up onto a DevHub page on Polycademy’s website and sourcing more people. If I unfortunately don’t get enough people to sign up and pay the deposit, I’ll refund and have to move to another city :(.

Oh I recently also scored an interview with Digital Sydney regarding Polycademy.

You've heard of Codecademy right? It's an amazing service. One thing they lack however is a REPL for PHP. A REPL stands for "Read Evaluate Print Loop". That's basically what Codecademy is doing but obviously with gamified elements and code testing to see if you did it correctly. Today after 1 week of 24/7 hacking and 70 hrs of coding, I present to you PHP Bounce. The only educational (mission based) REPL for PHP on the market today, exclusive to Polycademy! 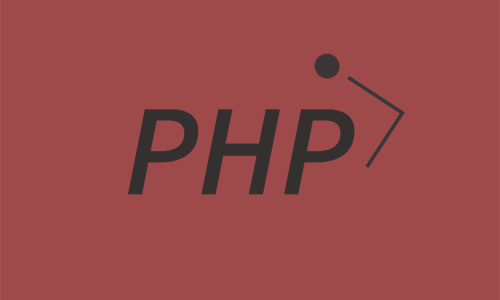 It still currently very beta, and only has one mission on it right now. But I will be furiously adding new lessons. More importantly, PHP Bounce will be used in Polycademy's classes to teach the basics of PHP and programming algorithms.

The website url is currently at "http://phpbounce.aws.af.cm/". I haven't brought it into Polycademy's server due to possible security reasons, but I made it as difficult to crack as possible. There's a lot of backend magic happening. After stress testing it with a couple of users (and that means you!), I'll see if I can integrate it safely.

Enjoy playing around with it, make sure to keep checking back for missions.

By the way, we have a competition for a fully paid scholarship at Polycademy worth $5000. Check it out at the loop. Get in quick!

Did you know Polycademy is running a series of free events/conferences in Canberra that shows people how to deploy simple web pages and other goodies (like understanding the tech stack) for free?

Anyway, the first one scheduled is on the 15th of January 2013. The event page is on our Facebook and Eventbrite. Official registration is via Eventbrite. The location hasn't been determined but will be dependent on the number of signups. So there are 50 spots available, so get in there quick: http://polyhack-es2.eventbrite.com.au/

I'm thinking of running a few more events also under the name Polyhack (not live yet!) so make sure to subscribe/like us on FB or Twitter so you can keep up to date with us!

Entry 29, a Possible Location for Polycademy

Rory Ford and a group of other entrepreneurs in Canberra have been negotiating with the Australian National University, to take the abandoned space between the Street Theatre and Kingsley Place and turn into Canberra's first coworking place called Entry 29.

What's coworking? Well coworking is essentially a shared working space. It is mainly used by urban freelancers or entrepreneurs who are seeking an office space away from home without having to pay for the entire space or the entire time. These places are also good for meet ups and collaboration between different entrepreneurs. This reduces the typical isolation of professionals who work alone.

It's not just a space but a community. A freelancing/entrepreneurial culture is required for these coworking spaces to succeed.

I've been meeting up with Rory to discuss if and how Polycademy could use the space as its launchpad. A couple weeks ago, I attended a brief open house and was able to check out the premises. It requires a lot of refurbishment as some people have broken into it while it was abandoned and created some interesting artwork. The doors to this establishment is scheduled to be opened in 2013, that's the same time as Polycademy is starting classes.

Rory is currently taking in applications of interest for the renting of the coworking space. If you're an entrepreneur and looking for a place outside home, free of distractions but also good for networking, then you should contact Rory on LinkedIn. Check out his profile at our homepage.

A coworking place would be an ideal location for Polycademy, students would be able to mingle and see other entrepreneurs at work with their projects.

Here are some photos that I took (as you can see there's a lot of work to be done): 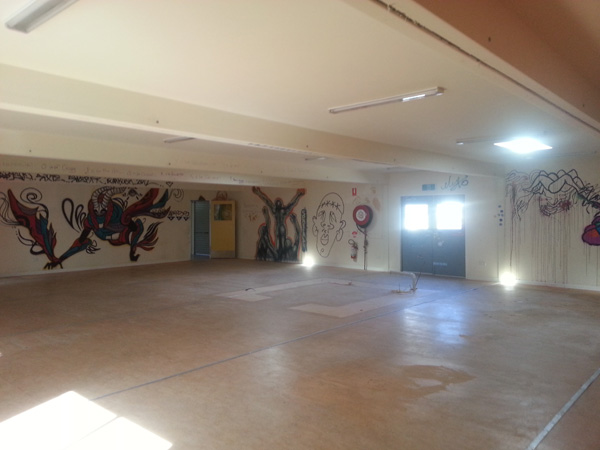 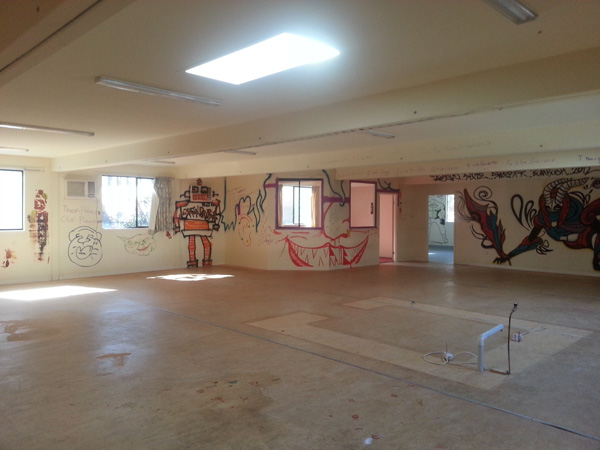 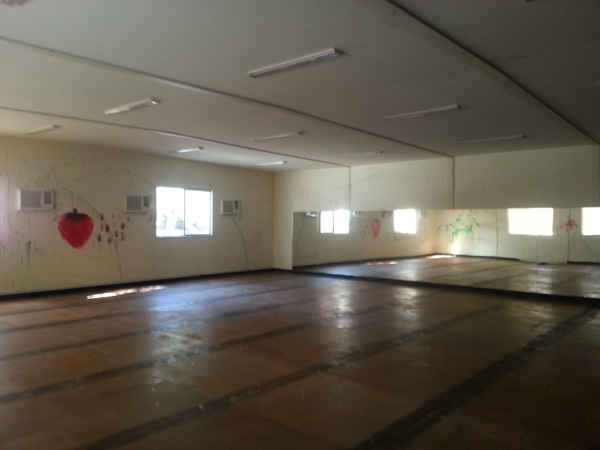 The location for Polycademy isn't confirmed, but this looks nice. Wait till you see it refurbished with a new bucket of paint!

Check it out on Google Maps here. Don't bother searching for it, it doesn't exist yet. Also you won't see it unless you zoom close enough to get the plane captured 45 degree angle shot.